United Nude : avant-garde creativity
United Nude started with a broken heart. That of a man who would later become the brand's founder: Rem Koolhaas. In trying to win back that girl he was in love with, Rem did everything he could to get her attention by trying to get back in her good graces by transposing the notion of romanticism at the height of his crazy desire....craziness that took the form.....of a shoe! At the same time, he met Galahad, the heir to a dynasty well known among shoe manufacturers: that of Clarks. Seduced by Rem's creativity, they came together to create a brand: United Nude. The model Mobius was launched in 2003: a unique shoe that was unlike anything else out there with architectural, artistic, and even industrial influences. Each design has a unique concept that could almost be described as avant-garde. Since that date, United nude has become a legendary brand at the frontier between design and fashion. 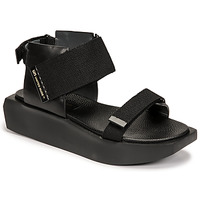